WHEN YOU RAISE A
FRISKY KID:
Health insurance can cushion the risks

By 6:00 am, David Jones is up every morning, getting a pot of coffee started and setting out a pair of chewable vitamins on the counter. After a quick shower, he ís laying out clothes for the day. These aren't for him.

These are for his 5-year-old son, Jacob. David ís already dressed, and just beginning his day 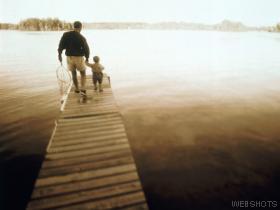 RAISING HIS SON BY HIMSELF

He raises his son Jacob by himself, but his care for children does not stop there.

David is also a high school teacher at Havelock High School. He teaches history, and is the head of the department there.

David has been teaching for eight years now, and he still loves his job. He ís good with kids, and a great conversationalist.

I asked David about his health, and about his son's. He was surprisingly happy to speak about the topic:

"I was sometimes a sickly kid, and always had something going on: allergies, flu, colds, you name it. I was worried about Jacob being the same way, at first. He ís much tougher than me, though. The boy is growing like a horse, and has the constitution of an ox."

Son Jacob plays kid's football and other sports, and does well for being five and in Kindergarten. I asked David if that scares him at all. Does he worry about Jacob getting injured? If so, what then? 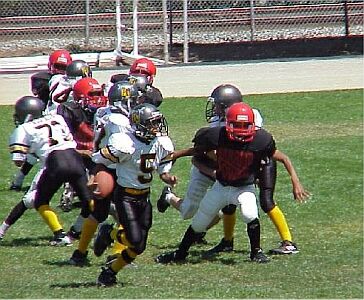 "I suppose it could happen, but he' s a tough little kid. I watch all his games, though, and I guess there is a little part of me that cringes when he falls or something, but he gets right up and goes back in there," Jones says.

David is a big guy. Not fat or chubby, but "husky" or football big. Think football coach mixed with comedian Jack Black.

His hair is shoulder-length and his ears are pierced, but he is well-kept and neat. He exudes a feeling of good cheer, and when he speaks, you feel his personality working on you. It is infectious.

I next ask him about insurance:

"Well, I'm insured through my job now, so Jacob and I have full coverage. If anything went wrong, I know we have protection. I'm not too worried about that side of it. I also have an AFLAC policy on Jacob as well, so he has better coverage than me," he laughs.

Asking how much he spends on insurance a month, David tells me:

"About $400 dollars a month goes to insurance for us. I have it set up to come out of my pay before taxes so that I never have to worry about forgetting a bill or falling behind on any payments. My boy is too important to me to drop the ball on stuff like that."

David Jones is a practical man. He has to be. Though his estranged wife occasionally assists with money from her higher-paying job, he takes care of his son mostly by himself.

He has played the role of the single father for a few years now, and has gotten pretty good at it.


IN HIS "RECKLESS YOUTH," NO INSURANCE

I asked him about his life before Jacob. "I used to be much more careless and reckless before Jacob and before teaching. I was a lot wilder then," he says.

I ask him about his insurance coverage at that point in his life.

"Was I insured? Hell no! I didn't have a lick of coverage then, but statistically speaking, you're at your healthiest at that point in your life. Everything starts going downhill, really, after you hit your thirties. I knew that I would be getting insurance as a teacher after I ! got hired somewhere, so I wasn't too worried. Until then, I just tried not to break anything major or necessary."

David feels himself lucky to be covered as well as he is through his job.

He is very aware of the inconveniences he would be subject to if he were not insured, and has heard horror stories from some of his friends and students.

He knows how important coverage for himself and his son is, and he is thankful to have it.

David Wright hails from scenic Bethel, NC. He enjoys music, writing, and the company of his wife and family.