When a "DOC" needs a doctor:
the road is not always smooth
Treating daughter Janey,
topping it off with Ben and Jerry's

Everyone expects a medical doctor to have the best medical care available. However, at one prestigious medical facility in the United States, that isn't the case. One doctor struggles to manage healthcare for his family as he provides healthcare to many individuals coming into the emergency room.

It's 10:00 p.m. and Dr. Andrew Sherman has just begun his shift as field supervisor in the emergency room of John Hopkins University.

This will be Dr. Sherman's sixth straight night supervising the ER at the very populated hospital located in Baltimore, Maryland. However, tonight, things are different. Tonight, Dr. Sherman isn't feeling very well. His wife and six-year old daughter, Janey, have been fighting the flu, and Dr. Sherman is afraid he has come down with the virus.

Dr. Sherman helps his first patient at 10:04 p.m. A house fire sent a young boy and his brother into the ER with severe burns on their bodies. At 10:13 he helps an elderly man that appears to have a heart attack.


WHEN A "DOC" FEELS SICK

In between patients, Dr. Sherman has to do the unthinkable in an ER: he has to sit down. Still feeling upset to his stomach, Sherman continues on with his work, knowing the others' problems are much larger than his own. Immediately after treating the heart-attack victim, he stops in the office of a fellow doctor who gives him some Maylox. Sherman continues his work until the next day.

Because Sherman practices medicine, his insurance rate is extremely high. With an expected 25 percent increase over the next year, the cost of practicing, according to Sherman, medicine has become outrageous.

This leaves him with many crucial decisions to make. He first must decide to spend money by including his family in his primary care doctor treatment. With the cost so high, Sherman and his wife have decided to add Janey and their other younger son onto his wife's insurance.

She works for the Board of Education as a school administrator and receives cheaper benefits than John Hopkins provides.

Although no family members have had to deal with serious injuries or diseases such as cancer, as Sherman approaches the age of 50 he is scared of diabetes that his family has a reputation for having. Dr. Sherman has taken an active stance in the attempt to lower medical practice insurance, so that doctors that do have families can have insurance with John Hopkins. Sherman has addressed the many concerns of the high cost of insurance coverage for his family, as he knows he himself is covered for life.


THE DOC" SEES A DOCTOR

After his night shift has ended, Sherman heads home to his family. Still not feeling well, he heads to the doctor. Under his insurance plan with John Hopkins, Sherman can see any doctor in the John Hopkins network free of charge. This is just one benefit he receives as being an employee with the medical facility. 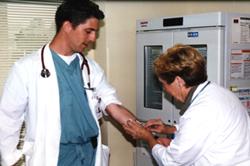 Sherman has decided to bring his daughter in for treatment for his virus. However, Janey does not get any insurance through John Hopkins. Because Sherman is a doctor, the facility expects Sherman to treat his family if they would happen to come down with an illness. John Hopkins would pay for Sherman or any member of his family to be hospitalized for a long-term illness or get special services such as eyeglasses or x-rays.

Today, Janey has a 102 degree fever. She has been admitted to the hospital for a stomach virus. Because she is such a young age and has such a small body figure, the doctor doesn't want to take any risk so Janey is admitted to John Hopkins.

She is now in the care of a doctor, normally her father, at the hospital. As Janey falls asleep on her first night of admittance into the hospital, her father reflects upon the first night in as a patient's parent, instead of being the doctor.

Sherman has a new found appreciation for doctors. After spending two nights in the hospital, both Sherman and his daughter return home to enjoy some nice Ben & Jerry's ice cream, Janey's favorite.

Holly Osborne is a senior at East Carolina University majoring in Communication. Because she is a full-time student, she has medical coverage under her parents' insurance. However, with graduation less than a few months away and forced to find her own insurance, she is unsure of what her medical coverage will be become.