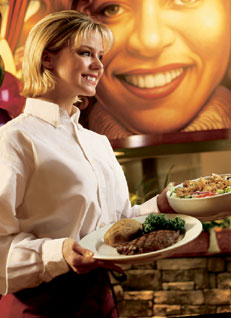 SERVING UP MEDICAL INSURANCE:
for those who make the grade

"I really feel for Anne and the situation that she is in, because there is no way I could ever imagine myself in her shoes!"

Come visit with "Anne," a waitress at O'Charley's, a single mother with a young child at home. She had Medicaid while she was pregnant, but then lost that government insurance once she had the child -- and found it far too complicated to regain. Now she seeks to gain private insurance through her job.

It's never easy to be both a waitress at a local restaurant and a single mother with a young child to care for at home.

You're always going to run into money problems, and possibly medical bills which you cannot afford.

Medical insurance can make all the difference in the world.

To explore these challenges I chose to interview a woman named "Anne Fieldhouse" (name changed). I did not know her well, although she worked with me as a waitress at O'Charley's in Greenville.

I did know a few things about her just from hearing other people talk to decide she would be a good source to interview on health insurance.

Anne is 27 years old, and has one child, Asher, nine months old. She is single, although she does live with the father of the child.

Anne has no college degree and hasn't been able to find a solid job to completely support her family.

Baby Asher is currently on Medicaid, which includes 100 percent of well-child doctor visits. His mother says he is not presently taking medications. He has not had any health problems since he was born, besides a cold in the past. He is a very healthy baby.

Anne and Asher, and her boyfriend (Evan) live together in a two-bedroom duplex in Greenville. Anne says they don't have many bills, besides the $450 in monthly rent, plus utilities.

Anne and Evan have family members who help support them since they have Asher to take care of now. Anne's mother and two aunts are helping them with their rent payment for one year. The family pays $200 and Anne and Evan pick up the other $250.

The couple no longer have a car to drive. Their vehicle caught fire and severely burned Evan, who was nearby.

Evan normally supported their child, but at this writing had been in the hospital for three weeks with second-degree burns which kept him out of work.

The hospital costs were expected to be very high when Evan gets out, but luckily Medicaid was to take care of the bills since he had an independent child at home.

Anne and Asher are very grateful to Medicaid for taking care of them; otherwise they would never be able to pay the hospital bills.

Evan was employed with Advanced Concrete Company, and he only made seven dollars an hour. Since the burns put him out of work, he was seeking disability pay.

While she was pregnant with him, she was able to receive Medicaid. After birth Anne no longer has Medicaid. She has not reapplied for it, she says, because they were giving her too many problems in the application process.

That left Anne with no medical insurance, but the hope of getting insured through her employer, O'Charley's.

Anne has been employed with O'Charley's in Greenville since August of 2003. Working at the restaurant is her only job besides taking care of Asher at home during the day. Anne's average income in a week at O'Charley's is $200.

She applied for insurance through her employer. At this writing she doubts they will accept her.

One requirement for the insurance with O'Charley's that Anne knows she meets is working at least 25 hours a week. Most weeks Anne works four nights and puts in about the required hours. But other requirements make her doubtful.

Anne says she currently has no health problems, and has never had any in the past. Nor has she had to take any medications except when she has a cold or other mild ailment The insurance through O'Charley's covers 100 percent of doctor visits and 80 percent of medications she might need. There is a deductible on all hospital visits and surgery, and a $25 coppery for routine visits to the hospital.

It would really help Anne out if she were to receive this insurance, but she says she does not want to get her hopes too high.

Before serving at O'Charley's, Anne did not work for over a year while she was pregnant. Before that, she was a long time waitress at Rumor Mill Café in Little Washington. Even though Anne is 27 years old, she has no college degree and hasn't been able to find a solid job to completely support her family.

Her living conditions are "okay" for right now, but she really needs a car to get back and forth from work and to run errands during the day.

Interviewing "Anne Fieldhouse" made me really appreciate what I have and made me very grateful that my parents support me enough to pay my way through college, so hopefully some day I can get a good job.

I really feel for Anne and the situation that she is in, because there is no way I could ever imagine myself in her shoes!

My name is Laura Byron and I am in my junior year at East Carolina University. My major is Communications with a concentration in Media Performance. My minor is Distribution Technology. I will be graduating in the Spring of 2005, and hope to find a job in central N.C., which is where I plan to live.